Please allow me to open with this disclaimer: this post may seem unrelated to this website and the mission field. However, it’s important to remember that mission work is carried out by people and families who have many of the same needs as any other, ie: spending quality time together. One of the primary purposes of this blog is to paint an accurate picture of our lives as a missions family. That said, I hope you enjoy this post.

Apparently I married a weirdo. But, in the end I agreed. Oh my goodness, what fun! It was really neat to see how my girls chose personas that reflected their own personalities. Mila, compassionate and brave, was my bold and noble dame/knight, Talai, humble and devoted, was my just Ranger often hidden in the shadows and Hadassah, passionate and daring, was my Nordic Viking (perhaps more after the style of Leif Eriksson).

And yes, Sal went as a monk and evangelized several times that day. He is such a great example of how being a Christian is who we are and not something we simply believe in or do. In perfect medieval monk persona, he shared the Gospel with fellow monks, knights, elves and tavern maids. It was pretty wild to witness! I was convicted to remember that in truly any situation, the Gospel applies and can be preached. 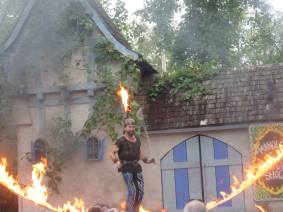 What festival would be complete without a Pyro show? At one point the bola at the end of his wire flew off into some bushes next to the stage. We were really happy that his alternative pair didn’t malfunction while they were flaming and swinging toward the crowd!

At this point, the people already inside the gates could probably hear our girls’ excitement 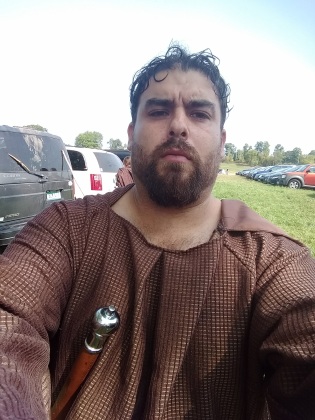 Sal indeed went as an armed monk. Apparently you can get Jesus into the soldier, but you can’t take the soldier out of the man. 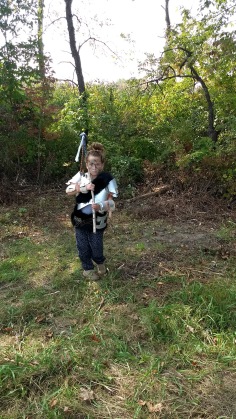 Hadassah really embraced the Scandinavian Viking persona. The challenge was to keep her from stabbing unsuspecting victims as we walked by. 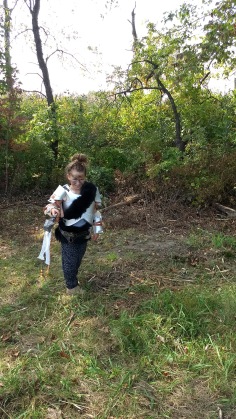 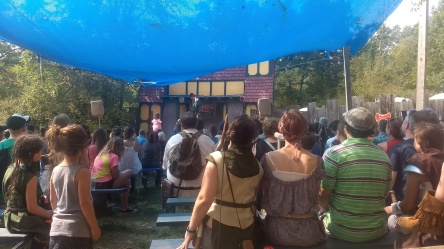 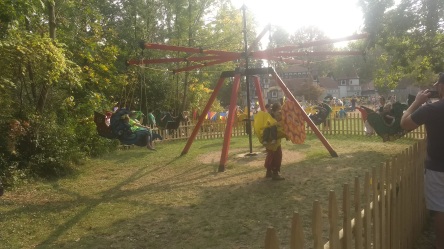 The rides were all manpowered. I’ve never seen anything like it. A+ for creativity.

Mila joined an archery contest. My little knight is actually quite an archer. 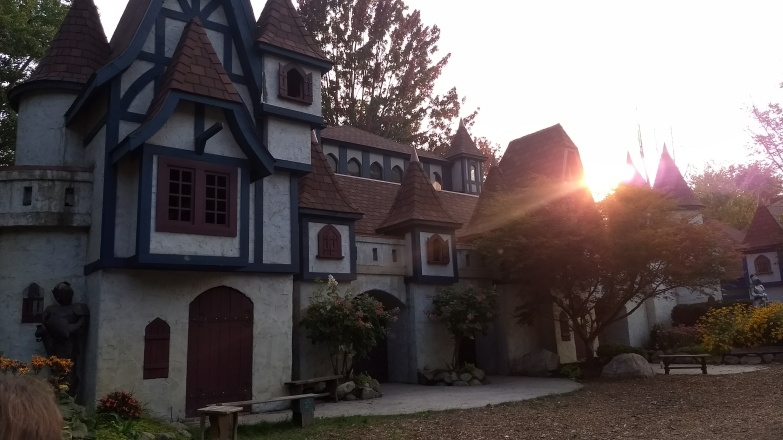 The festival has constructed an impressive and permanent village inside the city of Holly, MI.

We met up with Heather’s family who put out “warrants” for our entire family to be “arrested.” Our bail? Singing and dancing to songs about teapots and unicorns

This is where security realized that Sal’s four-foot Claymore sword was real. It fell out of the sheath when Sal accidentally dropped it. Authentic weapons are allowed, but unsheathing is a big no-no.

I have no idea what the wolf-creature was about, but Talai loved it

We enjoyed watching a hot air balloon fly over the horizon on the Renaissance village as the afternoon drew to a close.

Our whole family is intrigued with history.  So as to do something fun and largely unique to the western world, we decided to go to the Michigan Renaissance Festival this coming weekend. In addition to our typical homeschool curriculum, we’ve added classes on the Middle Ages, Renaissance and Knighthood. We’ve also been working on costumes, because an opportunity to learn history through interactive immersion is a homeschooling mom’s dream.

As I hurried to put some costumes patterns together (and begged my mom, a seamstress, for help), Sal kept changing his mind on what persona he wanted to go as and so put off giving me a solid costume idea. It wasn’t until I threatened to send him in a potato sack that he finally gave me something to work with.  Yesterday morning he told me, “I want to go as a Renaissance-era Missionary.”

My first though was, “Jeepers, can’t you just put aside saving the world for one day and have some fun?” Visions of our typical joint shopping trips began filling my mind. Whenever Sal accompanies me grocery shopping I have to plan for it to take three times as long in order to anticipate the theological discussions with strangers which seem to have made their way onto my shopping list.

But immediately following I was convicted of how wrong-headed this train of thought was. Firstly it implied that we can’t have fun and share the love of God simultaneously. Anyone who has worked in children’s ministry could debunk that idea in a heartbeat.  And worse yet, I was guilty of seeing being a missionary as an occupation; as something we do and not as an identity; who we are. Truthfully it is the very identity of the Christian believer which should compel him or her to be ever vigilant, seeking the spiritually deceived and oppressed and shedding the light of truth in their lives.

Therefore, I would argue that it is every Christian’s duty to be mission-minded. Anything less and one risks living in violation of the Great Commission and Jesus’ very last words:

“And Jesus came and spoke to them, saying, ‘All authority has been given to Me in heaven and on earth. Go therefore and make disciples of all the nations, baptizing them in the name of the Father and of the Son and of the Holy Spirit, teaching them to observe all things that I have commanded you; and lo, I am with you always, even to the end of the age.’ Amen.”

I’m not saying that every Christian should start packing their suitcase, but I do believe that a faithfully lived life is one lived within the constant tension, or awareness, that we’ve been called to “Go.” Some will be called to take the Gospel to foreign lands and all should be open to that if God so directs them. Most, however, will be called to “go” to their workplaces, their schools, their families, their neighborhoods and all their spheres of influence. Not every Christian is called to be an Evangelist, but we’re all called to evangelize. Not all are called to be Pastors, but we’re all responsible to bear witness to Christ and edify His body, the church. Not every Christian is called to witness in nations, cultures and tongues unfamiliar to their own, but we’re all called to love and to do good to all men and to preach the Gospel wherever we go. As Christians we should be mindful of the needs of the people around us and actively help relieve those needs while sharing the Good News. The Lord has truly brought the world to our doorstep here in the United States. As hatred and division intensify in our nation, we should be the firsts to reach across cultural and ethic lines extending hands of friendship and brotherhood. 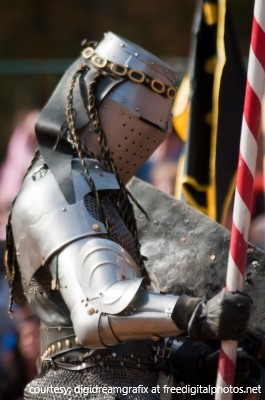 There is no “life as usual” in biblical Christianity. Every day we awaken with breath in our lungs is a blank page in the adventure novel that God is writing with our lives. Do we let Him take the pen or do we struggle to control the ink and smudge the page in vain attempts with an eraser? Do we see ourselves as protagonists in an epic love adventure, filled with danger and evil now, but ultimately with a happy ending? Routine can be, and often is, a very good thing in life, but if our lives are mundane we have probably become our own authors. Submission to Christ as Lord and God the Father as supreme Author are the keys to meaning, significance and adventure.

The church of America is being awakened to function in her identity.  The disciple James said that a double-minded man is unstable in all his ways (James 1:8). I know it has become cliché, but it really is time to stop doing church and to be the Church, and that applies not only to Sunday morning, but to every day of our lives. We see the acceleration of negative change all around us. Will we, as the bride of Christ, rise to the occasion and meet new challenges and trials with love and compassion in our eyes and in our hearts? Will we be missionary-minded?

Thus this Saturday, with my daughters dressed as a Ranger, Viking and Dame and my 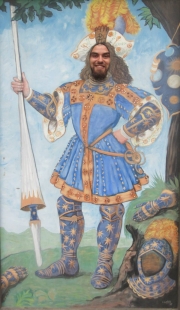 Evangelist/Apologist husband  dressed as a medieval Friar, we’ll take the Gospel as undercover missionaries back in time and forward in relevance. Do you have eyes to see the adventure God is weaving into your own story? Can we feed the sick, father the orphan, lead the lost, pray for the hurting, heal the sick, comfort the mourning, die to ourselves and preach the Gospel to every creature, every day? In these days, the world cannot afford apathy from the bride of Christ. 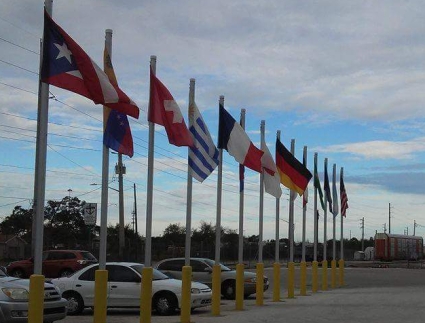