Hello again! My goal with this relaunch is to post weekly updates. Thank you for your patience as I get this whole blogging thing figured out and start building momentum.

So, without further adieu, let’s jump in. We are a nomadic family. It is a challenging but awesome lifestyle to live. We have learned to understand and sympathize with different cultures, worldviews and perspectives, not through textbooks, but by a real working experiential kind of knowledge. My girls are multi-lingual and have received lessons on things like honor, courage, faith, humility, integrity, generosity and responsibility from varied cultures with completely different ideas than their own. They pride themselves on being “TCKs” (third culture kids).

Once, in a tribal community in southern Mexico, my husband, Sal, was trimming trees for a missions base. As a particular branch hit the ground, an angry buzz suddenly filled the air. There had been a wasps’ paper nest hiding in the foliage of that branch and a cloud of perturbed black wasps emerged in search of the perpetrator. Sal leapt from the ten foot wall he’d been sitting atop and ran inside, slamming the door behind him and luckily sustaining only a handful of stings.

Our neighbor Jorge, a member of the Zapoteco tribe, came over to investigate after hearing the commotion. Once the wasps had cleared the area, he showed us how to break the nest into pieces and set it in the sun to harvest honey from it. Our whole family got to work extracting and collecting some of the most delicious honey I have ever tasted. (Meanwhile, back in the US, an Entomologist from MSU assured us that there was no such thing as a honey-producing wasp.) When we took a cup of it next door and offered it to Jorge, his face split in an ear-to ear grin and he put up his hands and shook his head. “You have fought and prevailed against the black wasp. This was your battle; now, you alone must eat from

the fruit of your victory,” he said. It was a lesson in perseverance and taking pride in your accomplishments from a Mesoamerican indigenous man from a tribe with a long history of warrior culture.

Being nomadic really is a spectacular way of life, but right now is moving time which is one of the most difficult aspects of it, especially with children. For the past couple of weeks the girls, who are homeschooled, primarily self-taught and watched learning videos as my attention was consumed by sorting and packing. Keeping a consistent schedule in their schooling is always a challenge before, during and right after a move. During this time Sal has pretty much lived under our Ford Expedition, which we bought at a Detroit Auto Auction. He is preparing it for the long journey hauling our 24-foot camper. 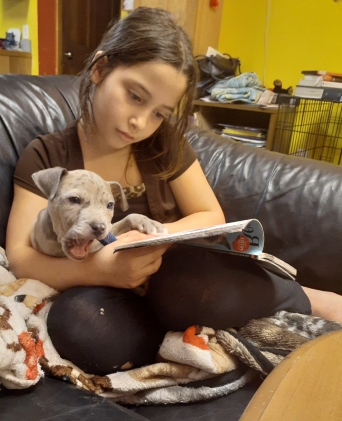 Maybe it’s because we’re getting older or maybe life’s experiences have matured us, but Sal and I decided to finally clear all of our childhood belongings from our moms’ homes before leaving again. It never ceases to surprise me how deeply rooted the materialism from my culture and childhood are. Somehow we can spend years living out of a couple of suitcases without so much as a thought for those things packed away in a basement back in the US, but then I go to throw them out and it is so difficult. From hand-made cards from my girls back when they were little to handkerchiefs from my great-grandma, I wrestled with the sentiment they held. But in the end I managed to clear out our belongings so that everything our five-person family own fits nicely in our camper and one small closet at mom’s. It was grueling, but there is

something truly exhilarating about getting rid of stuff. It’s like cutting the ropes to the sandbag weights of a hot air balloon so that you can soar higher (and yes, I know that’s not really how they work anymore, but you know that’s the image our brains conjure up). The downsizing has left me with a lingering sense of liberation.

So, here we are stepping into the next chapter of this grand adventure. Sal and I are tired and the girls are rather snappy with each other having spent too many hours unsupervised in each other’s company over the past couple of weeks. But then, some of the best adventures begin when we are at our weakest. Our ultimate goal is to return to Africa, specifically Ethiopia, but what lies between here and there is a bit of a mystery. All we really know is that the next step to get there involves getting to Charlotte, North Carolina. And so, having hugged and waved goodbye to our mothers, brothers, sisters and my grandma in northern Michigan, we set out south.