It’s been three weeks now since we left Michigan and this time of travel has been filled with blessing upon blessing. As we prepare for our move to Uganda, one of our primary purposes of this trip was to fundraise and seek out ministry partners. The Lord, however, has turned it into so much more. As we reconnect with friends and church family, God has provided us with many opportunities to minister and be ministered to and we have been humbled, encouraged, convicted, rebuilt and drawn into more intimate fellowship with Him.

During our last week in Michigan some friends of ours, a fellow homeschooling family, handed us a wad of cash and insisted that we use it to go to the Creation Museum which we would pass on route. We spent two days visiting the Museum and the Arc and it was amazing.

To get to the Arc, you have to park and take a shuttle. We told the girls that the shuttle buses were time-travel buses and that we were going back pre-flood to the time of Noah. It happened to be a day of heavy fog which created a convincing and magical effect. Mila, of course, didn’t believe us but played along. As you enter the Arc they play wind gusts and thunder through speakers which happened to match that day’s weather. When Hadassah bravely declared that she was ready to face the flood even though she knew that she wasn’t included in the eight people who would be on the Arc when it came, we decided it was time to let her know it was all just a game. After that she and Talai had fun running around and pretending to tend the animals while they “waited for the Arc to stop on dry ground.”

For those who don’t know, the Creation Museum is a museum which showcases the Creationist worldview of the earth and everything in it. The Arc is a replica of Noah’s arc built to Biblical proportions. Inside it showcases how creatures of every kind could have fit within the arc and just how that might have been managed, answering questions like: how would they have fed all those animals and what did they do with all the waste. Whereas the girls enjoyed and learned a lot at the Creation Museum, they were absolutely captivated by the Arc. The sheer size of it is very impressive and I thought it was fascinating to no end to consider the technology that may have been used to address needs like watering the animals and creating a current of fresh air.

We also ran into a YWAM team from Tyler, Texas while we were at the Arc. We spotted a van with the Tyler YWAM logo on it and so we took a picture of it and sent it via Facebook to the base, letting them know we had seen their van and were also at the Arc. They, unbeknown to us, then took a picture of Sal and I from Facebook and sent it to their team. While we were on the second floor of the Arc we noticed a young woman staring uncertainly at us. When we made eye contact she seemed to make up her mind and walked over to us. “Are you Sal and Heather?” she asked. She was part of the YWAM Tyler team and had sook us out to say hello and introduce us to leaders and other members in their team. We had a great time of fellowship and later when we were on our way to Austin, Texas, we stopped the night at the Tyler base which turned out to be an awesome YWAM base which really embodied the generous and mission-sending heart of Youth With a Mission (YWAM). We reconnected with some of the YWAMers who had been on the Arc and enjoyed an overall time of rest and delicious food. We also connected with a YWAM family whose vision is to take entire families into the mission field. Since we share the same philosophy of families in missions, we decided to keep in touch with the idea of possibly working together in the future. This is just another example of the grand family that YWAM is. 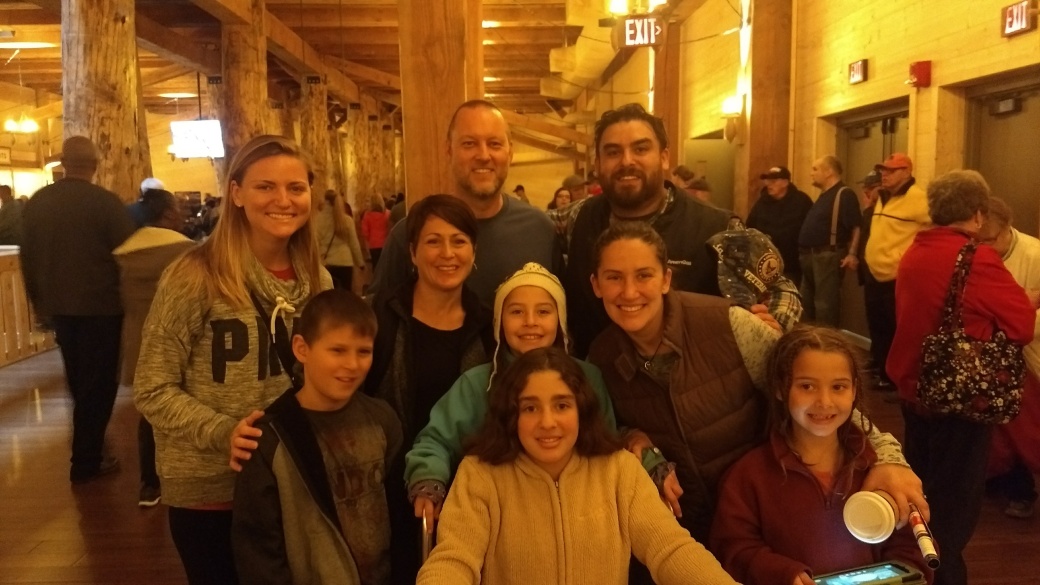 After our visit to the Creation Museum and Arc we headed to Charlotte, North Carolina where another family and friends of ours hosted us and arranged for us to share about our mission work on a college campus and in their church. With their help we made some valuable connections with others who are either already ministering in the same area of Africa or interested in extending their resources to help with the mission work we will be doing. Already we are communicating with a ministry that wants to get practical technology into the hands of students in Northern Uganda and excited about how we might work together to do that.

These particular friends who hosted us in Charlotte are some of the most generous and devoted Christians we know. Being with them was both convicting and encouraging. Our hearts were filled as we fellowshipped and discussed deep truths late into the night. They are steller apologists which means we had a lot of fun thrashing out and debating many different theological and philosophical issues. Overall it was an extremely blessed time.

Currently we are camping on a friend’s property in Austin, Texas. To understand the significance of our time here, you need to know a little of our history with this place. Back in 2007 Sal and I dedicated our lives and family to the Lord after God had miraculously saved our marriage. Shortly after, following God’s leading through prayer, we moved out to Austin, Texas to “start over.” On the Sunday after our arrival we decided to start our church shopping by attending the church which was inside a warehouse across the road from our apartment complex. It was our first experience with a fiery charismatic and passionate for Jesus group of people and we were amazed. Neither of us came from Christian families and we had no idea that such a sincere and tangible relationship with God through His Spirit even existed. We were challenged and captivated and hooked immediately. It was from here that God truly restored our marriage, gave us a vision for the future, captured our adoration and called us to the international mission field.

There is something unique about returning to where it all began that stirs our spirits. In the few days we’ve been in Austin and reconnected with our old church, Northwest Fellowship, we have already been laid bare before God as we repent of areas of compromise in our lives and press into greater obedience and fellowship with Him. God is faithfully drawing nearer to us as we draw nearer to Him.

Our friends who, from our first days in Austin, became spiritual parents to us and grandparents to our daughters invited us to share in their family Thanksgiving. It will be a huge blessing to do so. On Friday night I am accompanying the young adult prayer team that goes to Sixth Street, Austin in bright orange T-shirts to offer prayer and words of hope in a mardi gras-style environment. Sal and I were among the original group of young people who dreamed up the idea and participated in its birth. It will be a great blessing to partake in what it has matured to over the past nine years.

In about a week we will head to Gillette, Wyoming to reconnect with our home church family there. We look forward to seeing old friends and fellowshipping with them for a time before we head to Uganda.

As missionaries, a large part of the purpose of this trip was “business,” a.k.a., fund-raising and resource partnering. However, God is always working a myriad of purposes at once and He has used this trip to expose a weariness within us that we hadn’t realized was there. He is abundantly filling that place of weariness with renewed strength and intimacy with Him. It comes as no surprise that the Lord knew far better than we what our real needs were and He is fulfilling them with His own perfect methods.

We appreciate your continued prayers as we prepare for long-term mission work in Uganda and will do our best to keep a regularly updated report of our progress. We pray abundant blessings for you and your familly throughout this holiday season.

PS: There has been a slight change in our plans. Salazar, who was planning to head to Uganda in mid November, is now remaining Stateside until the first week of January. After reevaluating our timeline and speaking with the Arua base, we decided to delay his departure until after the New Year. By mid December the YWAM base in Arua will close for the Holidays. Together with the base we decided that it would be better for Sal to go when his stay wouldn’t fall on their vacation time which also freed him up to complete our US loop with me (super helpful) and cut out a second trip to Austin before we left for Uganda. Overall it made more sense to do it this way and proved a better use of resources. I will update the calendar in our earlier post promptly after publishing this article.